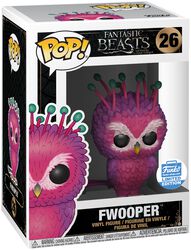 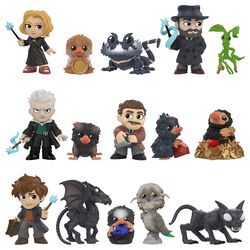 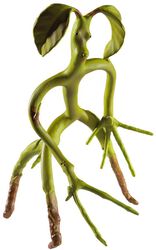 Newt Scamander first stumbled across the screens of the world in 2016 - and took the hearts of countless Potterheads and Muggles. No wonder: the shy magician couldn't be more lovable. Just like the magical beasts that he looks after and cares for with great care. The second part of the hit movie in the Harry Potter universe soon followed. And the next one is already in progress. Still can't get enough of Newt's magical world? Then explore our range of fan products with detailed "Fantastic Beasts" figures only a few clicks away at EMP. Shop these collectibles faster than Newt wields his magic wand.In addition to flexible bending figures, you can of course expect a large selection of the iconic Funko Pop figures. With their huge heads and spherical eyes, these vinyl figures are real eye-catchers.By the way: At EMP you also get the strictly limited Chase figures from Funko Pop. What is that? Chase figures are variants of a standard figure and differs from it, for example, by a piece of clothing or an accessory. Since only every sixth figure is a chase edition, this fan merch has an extremely high collector's value.

Fantastic animal figures: get your favorites right away

In "Fantastic Beasts and Where to Find Them", Newt transports his magical animals in an enchanted suitcase that magically expands and which he also likes to dive into! The "Fantastic Beasts" figures available from EMP will fit in ordinary sized luggage, but they are far too beautiful to disappear in the dark. Which of the characters is your heart beating for? At EMP you will find both the good, the bad and the wild. Whether magician and author of the "Fantastic Beasts" book Newt Scamander, his loyal Sidekick Pickett or the black magician Gellert Grindelwald: secure your favorite now! We take care of the rest and deliver your new treasures comfortably to your home. And don't be thinking about ordering Pickett alone! After all, the lively bowtruckle and Newt belong together.