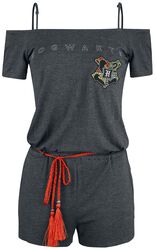 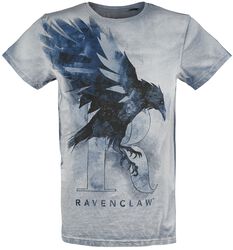 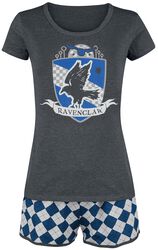 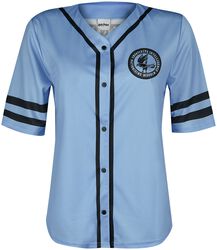 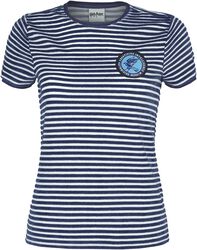 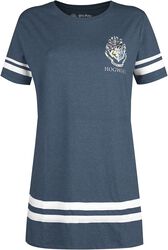 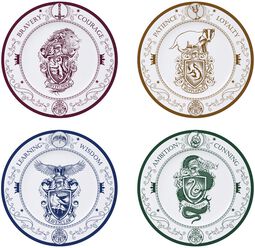 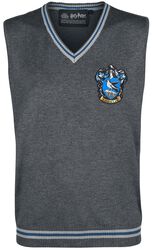 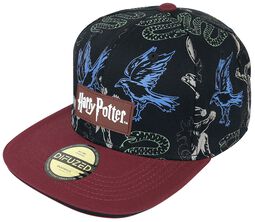 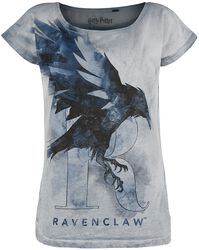 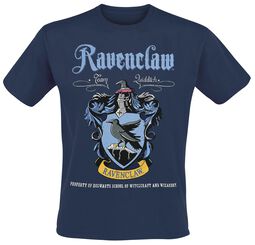 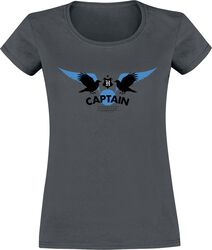 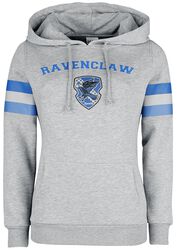 As a "Harry Potter" fan you know the heraldic animals and house colours of the individual houses inside and out. Below Slytherin, in the Hogwarts crest, is the emblem of the House of Ravenclaw. The midnight blue background with a graceful bronze-coloured eagle that has opened its wings is a true symbol of the members of this Hogwarts house.

You've probably already done a test online that told you where you belong and what your Patronum is, right? If you are a Ravenclaw you are sure to get a warm welcome from your housemates. Join the famous ranks alongside Luna Lovegood, Cho Chang, Professor Filius Flitwick and Garrick Ollivander and show that you have what it takes to become a true Ravenclaw.

Do you count yourself among the bright, astute and creative students at House Ravenclaw? Then the Ravenclaw merch in the EMP online shop should make your heart beat faster. For your personal happiness, you don't have to travel to Diagon Alley to get your next school outfit.

With our selection you can find everything you need conveniently online and present yourself in the style of the Hogwarts house with the bronze-coloured eagle. Decorate your apartment with stuff from the Ravenclaw Fan Shop and bring some Hogwarts home.

Ravenclaw in the common room

Ravenclaw was founded by Rowena Ravenclaw, who also acted as the first tutor. In the common room of the students there is a statue of the founder, which is made of white marble. Since then, professor Filius Flitwick has taken over as head of Ravenclaw.

Unlike the other Hogwarts houses, students cannot access the common room by saying a password in front of a painting. Ravenclaws have to answer a question asked by a taking door knocker shaped like an eagles head. Very suitable for the intelligent and clever minds of Ravenclaws. If the house members answer the question incorrectly, they have to wait for a classmate to answer the question correctly before they can go inside. The pronounced competitive thinking is typical of a Ravenclaw, which is why there are few who show ignorance when finding their way into their common room.

Fun Fact 1: The "oldest" Hogwarts student is a Ravenclaw

In addition to being a former Ravenclaw member, moaning Myrtle is the oldest actress to ever play a Hogwarts student. Actress Shirley Henderson was already 37 years old when the second Harry Potter film was being made.

The role of sweet Luna Lovegood is played in the Harry Potter film series by actress Evanna Lynch. As a huge fan of the books, it was an honour for her to play the role of a Ravenclaw student. However, with the exception of small school plays, it was also her very first role as an actress.

Fun fact 3: Dating on the set

A Ravenclaw and a Gryffindor - not in the movie, but in real life, "Luna Lovegood" actress Evanna Lynch and Robbie Jarvis, who plays a younger James Potter in a flashback, met. After a brief period of dating, it was over between the two of them, but they are still friends.

Ravenclaws get in, please: We're on our way to Hogwarts

Next stop: Hogwarts! Get on platform 9 ¾ - we will take you directly to the most famous magic school in the world. And since you are one of the particularly smart and creative kind, you’ll go straight to the Ravenclaw house.

In the Ravenclaw Fan Shop at EMP you can stock up on fan products online so that you arrive at Hogwarts in the corrrect colours from head to toe. Find your school uniform now or simply choose a new favourite piece for your summery Ravenclaw wardrobe.

If the Sorting Hat hasn't sent you to Ravenclaw, you can also discover the other houses like Gryffindor, Slytherin and Hufflepuff with us. What are you waiting for? Hogwarts is waiting for you. Of course, we have a wide variety of items related to Harry Potter regardless of your house. Take a look at Harry Potter figures, Harry Potter posters or Harry Potter t-shirts at EMP.