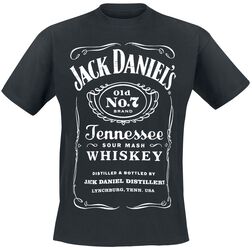 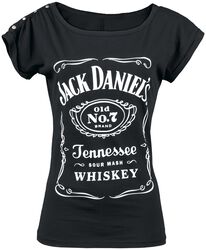 Mixed with some Coke, on the rocks or on your Jack Daniels shirt - Jack Daniels works well anywhere. This nectar of the gods, as Frank Sinatra himself used to call it, was flowing abundantly up until a short period of darkness during the prohibition. Dating back to 1886, the company is steeped in long tradition, which can be tasted in every single drop.

The taste of experience

This is no Bourbon, Jack Daniels is a Tennessee whiskey. The young whiskey is filtered through charcoal for around four weeks before it gets its unique flavour. But that's just one of its special features!

Because what would Jack Daniels be without its four-year maturation time in fresh oak barrels, giving it its colour and taste? We shouldn't forget about the most basic ingredient - water! The fresh, iron-free water is sourced from the distillery's very own limestone source in Lynchburg.

Good in a glass, even better on a steak! There are umpteen recipes requiring the use of the famous Lynchburg spirit, like a superb marinade with just a dash of old Jack, ready to be shared with your mates whilst you're working the barbecue! Keep the flames going with a windproof lighter available on the Jack Daniels merchandise pages.

Don't let the sun burn your eyes, head on down to the Jack Daniels merchandise pages on the EMP Online Shop for some useful gear, such as snazzy sunglasses and cool caps.

This brand has long been considered "cult", which is probably why there is so much Jack Daniels merchandise around! Buying a new bottle of Old Number 7 and need something to carry your money? Nothing does it better than a wallet from the Jack Daniels Shop, which includes a robust and practical metal chain so that no one can steal your whiskey money!

You can even attach the chain to your belt (which you can buy from us, too!). Yes, that's right, we even have Jack Daniels belts here on the EMP Online Shop.

Jack and Coke, Jack and rock 'n' roll - some things just belong together, like this black label Tennessee whiskey and festival culture! You'll be able to kit yourself out for the next Wacken or Hurricane festival with Jack Daniels merchandise.

Let's begin below the belt... The Jack Daniels Online Shop by EMP boasts tough enough shorts for any open-air festival, including enough pockets to store important items like a bottle of whiskey! By the way, it doesn't have to be an Old Number 7!

If you need something a little fancier, Lynchburg also produces the Single Barrel and the Gentleman Jack. If you're looking for something lighter, there's even a variant with honey (it's just as sweet as the brand's tops and shirts). If it's a bit warmer, why not cool yourself down in a racer-back tank top or crew-neck t-shirt.

EMP also sells hoodies and polo shirts, many of which are decorated with the same emblem you've come to love from the bottles. The white text on a black background has become a sign of good quality content!