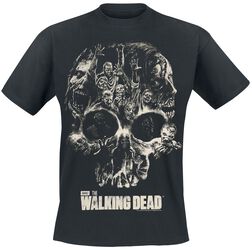 If the world is going to end then you might as well face the apocalypse appropriately dressed. Whether you are fighting for the good guys, the bad guys or the zombies, with a Walking Dead t-shirt you can let everyone know who you will follow enthusiastically into the abyss.

"Fight the dead, fear the living"

This motto from the zombie series sums up the "The Walking Dead" perfectly in one sentence. The nightmare begins when Sheriff Rick Grimes wakes up from a coma in an abandoned hospital. Surrounded by blood-smeared walls and bullet holes, the brutal chaos of a worldwide zombie apocalypse hits him straight away.

The world as it once was no longer exists and Zombies called ‘Walkers’ have taken over. There are dead and badly injured people everywhere and terrifying figures are trying to attack Sheriff Grimes. After a desperate search, Rick finally finds his family (along with some other survivors), and together they face the biggest challenge of their lives: a fight for survival. As well as an ever-present threat from the undead, they discover another enemy that’s just as cruel but far more ruthless than the Walkers could ever be: Other survivors! Hostile conflicts break out between groups of human communities as each one has its own laws and a different set of values.

The success of "The Walking Dead"

The Walking Dead is a brutal struggle for survival. Horror scenes, blood and death are recurring themes. But what made the series so successful is the mix of horror and interpersonal relationships as the characters navigate explosive social issues as well as the bleak reality of their new existence. Characters are often left facing difficult questions as the storyline deals with tough subjects like religion, racism, suicide, homosexuality, abortion and the death penalty. In the midst of an apocalypse, can our heroes maintain their humanity?

Who will you stand by?

Despite the dark undertones and thought-provoking social issues, The Walking Dead remains a fun, cult series with cool characters and crazy zombies. A Walking Dead T-shirt identifies you as unmistakably a fan. What can the undead expect from you in the event of an incident? Probably nothing good!

Rick, Daryl, King Ezekiel and even villain Negan are ready to stand by you in the apocalypse or do you prefer Zombies with oversized heads? Whatever you are in the mood for, at EMP a wide selection of t-shirts with various motifs are available. But even die-hard fans should beware. The high-quality graphics might make your blood freeze in your veins!
Chat FAQ Customer service
Minimize Close