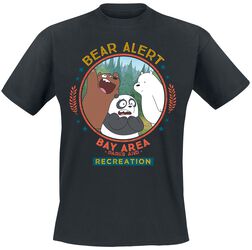 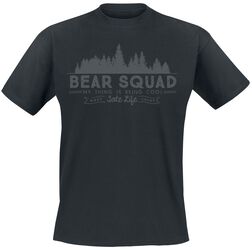 Have you ever wondered what it's like for a bear to live in San Francisco? Well wonder no more, that's exactly what the successful American animated series "We Bare Bears" by cartoon mastermind Daniel Chong is all about. The series is the story of three bear siblings, Grizzly, Panda and Ice Bear, who are trying to integrate into human society, which can be fairly funny and certainly turbulent!


If you're already acquainted with the bears, you'll know the reason why it's not so simple to integrate the human world:


The best way to describe Grizzly? A chatter box, loud and a little bit hyperactive. The most important things in his life are his friends and family, he just wants them to feel comfortable and he guides his brothers when they're in need. The protagonist of this somewhat chaotic trio, he tries to set an example for his other brothers, and when he's not busy spending time with them, he loves to make new friends and enjoys attention from others—and he even dreams of becoming internet famous, preferably through a viral video that he'd like to star in!


Grizzly is not only a born leader, he also possesses some quite useful skills that save him and his brothers from dangerous situations. Take for example his roar: it's so loud that it can fend off wolves! Although he's not as strong as his brother Ice Bear, he's guaranteed to win any conflict thanks to his razor sharp claws.


Panda is characterised as the drama queen of the trio. He's mainly interested in art and technology, which may have something to do with his Asian heritage. Unlike Grizzly, Panda is extremely shy and insecure, and it's not always that easy to live with Panda, whether it be because of his neurotic nature or his severe nut allergy that always causes him trouble, because let's face it: who can resist nuts?! Panda dreams of having a girlfriend and tries desperately to get one, but his hypersensitive nature and fear get in the way. He's no sports aficionado, but he does have a photographic memory, which can come in pretty handy for his art pieces!


Ice Bear is as silent and monotone as a Siberian desert at the height of winter. Although he's the youngest and quietest of the trio of brothers, he's also the strongest and most grown up. On the rare occasion he does speak, it's always with short, vague sentences and one-liners. Ice Bear loves his brothers: they're the most important thing in his life and he will do everything in his power to make them happy. He never shies away from cooking for Panda and Grizzly, preparing them great coffee drinks or even tending to the tedious household chores. If Ice Bear weren't around, the brothers' flat would quite probably have descended into chaos. Although he's almost always distant and emotionless, he's very protective of his loved ones and is very caring towards his friends and family. When he does decide to allow his voice to be heard, he always speaks in the third person and his voice remains monotonous—even when he's angry! He's mostly interested in karate, yoga, robotics and preparing delicious dishes. He's no normal polar bear: his intelligence is above average, his knowledge of technology wows the other characters over and over again, and he even makes various small machines and robots.


Find casual t-shirts, cosy hoodies and much more on EMP's We Bare Bears Fan Shop. Grizzly, Panda or Ice Bear: it doesn't matter which one is your favourite, EMP is the right place to get all your bear-chandise from the series that's guaranteed to make you stand out with funny motifs! The tops and hoodies are made of high quality cotton and are just as cuddly as the three bear brothers.


Cartoon fanatic? Take a look at Ricky and Morty and descend into a crazy and colourful world full of adventures! Or how about daring to step into the incredible pirate world of One Piece?