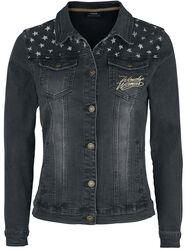 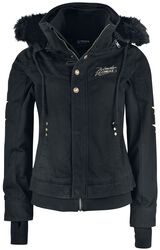 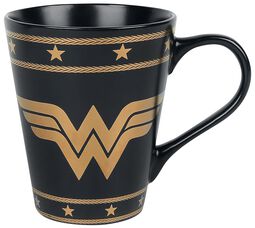 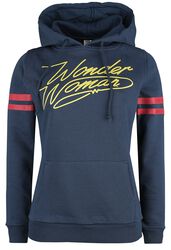 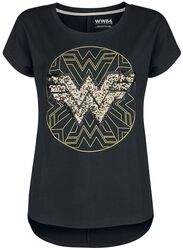 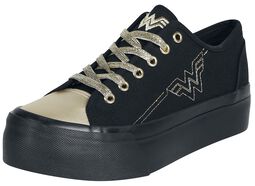 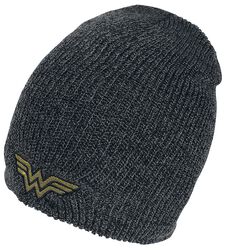 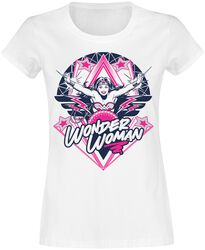 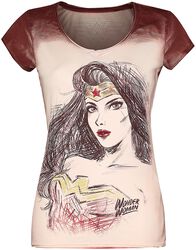 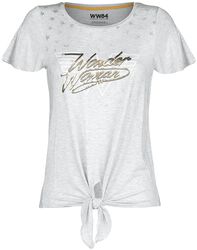 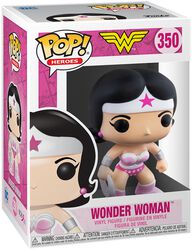 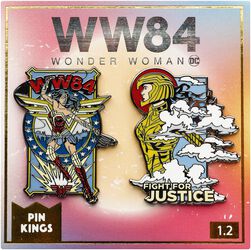 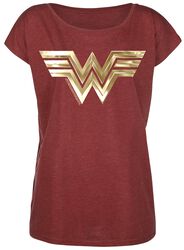 Justice, pride, divine truth and courage characterise this warrior woman, who is pretty much the longest-serving super heroine of the comic universe. She’s also one of the founding members of the legendary Justice League, and belongs to the biggest three characters from the DC universe alongside Superman and Batman.


Wonder Woman fascinates fans in particular due to her combination of femininity and incredible fighting skills. Her uniform consists of a golden tiara, a red bodysuit and a pair of blue shorts or a skirt.


Depending on the interpretation, Wonder Woman’s battle uniform may look a little different in the Wonder Woman fan shop. Alongside her red corset, she also wears blue shorts with white stars, or even a blue miniskirt.


Of course, the golden eagle with outspread wings is an absolute must-have. You can find the motif as a belt or a patch. Diana’s magical lasso, not to mention the cuffs that give the super heroine her powers are also unmissable accessories in our Wonder Woman range.


We have a huge range of Wonder Woman merchandise products for cosplay and events such as Comic Con, as well as for those fans who want to make a statement.


The heroine’s identity has changed over time. At the beginning, she was the Amazon princess Diana, who became the pilot Diana Prince during the Second World War. In this era, known as the Golden Age, Diana’s powers were gifts from the Gods.


In the sixties, the Silver Age, the story was re-written. Eventually, the clay figure brought to life by the Gods became a radiant demigoddess, who can quickly change her identity with the help of her lasso or a rapid pirouette. The golden eagle was later replaced by a double W for Wonder Woman, a logo which is now featured on many Wonder Woman fan merch items.


Decide for yourself which variation you’ll choose to pay tribute to the warrior princess. Cool Wonder Woman T-shirts and eye-catching dresses are among the most important items in the Wonder Woman Shop at EMP.


In the shop, you’ll also find cool and attractive accessories, so you can bring your heroine into your everyday life. Become the superheroine yourself, by shielding yourself from the pouring rain with a Wonder Woman umbrella. We even have smaller pieces of jewellery with Princess Diana’s insignia among our Wonder Woman fan items.


Want to have your superheroine at your side at all times? Then just slip on a comfy bathrobe or slippers with the typical red, blue and gold design. You don’t have to wear the full outfit to pay homage to the Amazon princess.


Our Wonder Woman Merchandise offers plenty of smaller items for exactly that. From bags to vinyl figures, we’ve got everything for collectors.


Of course you also find cool posters to brighten up your bedroom or living room in the Wonder Woman Fanshop. You’ll find Diana’s portrait along with loads of other superheroes. Whether alone or together with other members of the Justice League is up to you.


If you’re into girl power, you shouldn’t forget the younger version: Wonder Girl. Donna Troy and Artemis can also be part of your collection.


Looking for even more superhero fan merch? No problem. Discover our legendary Superman T-shirts or explore the dark corners of Gotham City with our Batman T-shirts. Of course there’s also lots for collectors. How about Spiderman figures or figures from the Avengers?