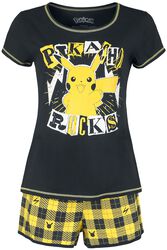 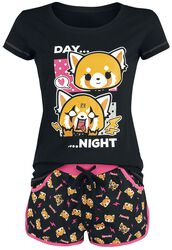 If you eat, sleep and dream anime, might we suggest a new pair of anime pyjamas? Fandom doesn’t sleep, after all.

Anime, in its most straightforward definition, is animation from Japan. But it’s become so much more to people of all ages across the globe. Anime has exploded across TV and film, uniting communities who can’t get enough of the genre. The die-hard anime community call themselves Otaku, and if you consider yourself one, EMP’s online anime shop is the perfect place to be. Anime can be traced back to the 1950s, when the first mainstream crossover that captured the attention of many a fan was Osamu Tezuka’s manga, Tetsuwan Atom (or Astro Boy, in the UK and USA). This revolutionised animation, illustration and Japanese storytelling, influencing films, TV shows and more for generations to come. Anime is not just ‘japanese cartoons’ – it is a visceral, visual and inventive way of storytelling.

Our selection of anime PJs include some of these iconic anime franchises, with exclusive Pikachu designs and Aggretsuko themed pyjamas, to name a few. Whether you want to sleep under the moon and stars in Sailor Moon PJs or rep your favourite Pokémon, anime PJs will keep you feeling like you, whether you’re hitting the hay or having a duvet day.

But why stop there? With our EMP anime shop, you can fill your day (and your cupboards) with merch from your favourite anime. From anime t-shirts and hoodies to bedding, Funko POP! Figures and more, we’ve got enough to make every waking (and sleeping) minute of your day a time for anime.