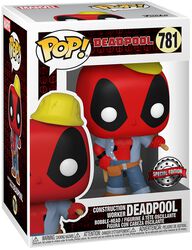 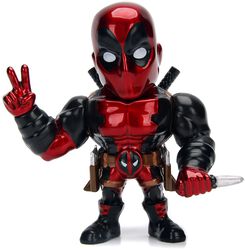 The Merc with a Mouth – or Deadpool, to his friends – has quickly become one of the most popular figures in the Marvel Cinematic Universe, and we’ve got plenty of Deadpool figures for collectors and fans…


When he was first introduced to the Marvel comics in 1991 Deadpool was depicted as a supervillain. The mercenary was introduced in The New Mutants and would also appear in X-Force but he would soon drastically switch into a more likeable antihero – still with questionable morals, of course.


Deadpool, whose real name is Wade Winston Wilson, is a disfigured mercenary with the superhuman ability of regeneration and physical prowess. He literally cannot die and has been ‘killed off’ in many iconic Marvel storylines throughout the years but never goes away for long.


Though he had long been a fan favourite for Marvel comic collectors, Deadpool became a cult pop culture icon after getting the big screen treatment. Hollywood hunk Ryan Reynolds would play the character and introduce him to a whole new audience. First portraying the character in X-Men spin-off, X-Men Origins: Wolverine, Reynolds would prove popular, landing Deadpool a solo movie in 2016. This was followed up with a sequel in 2018 and he is set to join the rest of the MCU following the Disney merger.


In a fun coincidence, you could argue that Ryan Reynolds becoming Deadpool was predetermined by fate. Nearly 5 years before taking on the role in X Men Origins: Wolverine, Reynolds was mentioned by the character in one of the comics. In Cable & Deadpool, he refers to his own scarred appearance as "Ryan Reynolds crossed with a Shar-Pei"


If having keepsakes which look like a Ryan Reynolds and Shar-Pei mix are exactly what you’ve been searching for, good news, we’ve got Deadpool figures right here. Our collection of Deadpool figures include different Funko POP! figurines. From the classic Deadpool image, with the mercenary shown posing with his swords, to more humorous figures, like a flamenco Deadpool or Deadpool as a Roman senator. Because when one thinks of Deadpool, ones mind instantly wanders over to the Roman Empire.


Deadpool figures make for a great gift for any Marvel fan, whether they’ve been a loyal reader for years or a recent convert thanks to the movies. Once you’ve picked your perfect Funko POP, don’t forget to check out the rest of our licenced Deadpool merch or other Marvel merchandise.