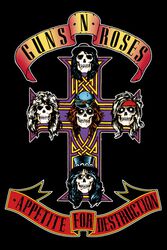 Now, comparing your home to a jungle is usually shorthand for ‘this place could really do with a spring clean’ but with the right Guns N Roses posters, saying Welcome to the Jungle will take on a much better meaning…


Decorating your home with Guns N Roses posters, pictures and other décor is the easiest way of turning your modest castle into a paradise city - and it doesn’t matter if where you live isn’t actually a city (trivia moment: it needs a university and a cathedral to be considered a city).


Guns N Roses need no further introduction from us, let’s face facts. You know them. Your parents knew them. Their parents too, probably. And chances are, the next generation will know them too. They aren’t just classic rock, they are legends. They’re that rare band who have more than just the one classic song. November Rain. Paradise City. Sweet Child O’ Mine. Staples in rock and roll history. Staples in music history.


They aren’t just a singles band, either. The albums are equally as iconic. Albums such as Appetite For Destruction, Use your Your Illusion, Vol.1 and Use Your Illusion, Vol.2 helped launch the Californian hard rockers into Hall of Fame territory. To date, they’ve sold over 100 million albums worldwide making them one of the all-time best-selling bands.


The band have also earned their individual places in the hall of fame, for reasons both good and bad. Egos and extravagance sum up the tumultuous history of the band. Axl Rose, the long-serving frontman and one of rock’s greatest ever vocalists, is known for being a star on and off the stage. Slash, one of the most celebrated guitar players ever, has been known to come and go after various clashes. But that’s what makes them real rock icons.


With such a rich legacy, it’s no surprise there’s plenty of reasons you’ll want to pick a Guns N Roses poster for your home. A picture is worth a thousand words and a picture of the classic Guns N Roses album cover, Appetite for Destruction, says plenty. We’re always adding new bits, so keep checking for any future Axl Rose posters, Slash pictures and other Guns N Roses décor.