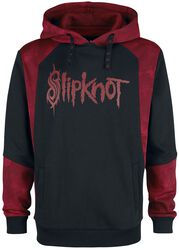 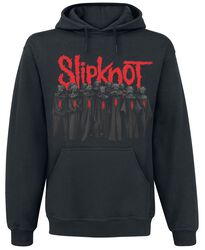 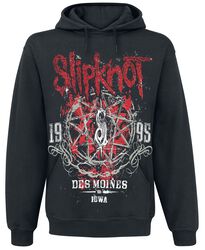 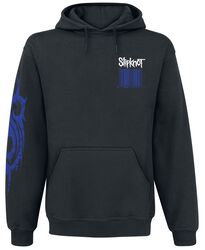 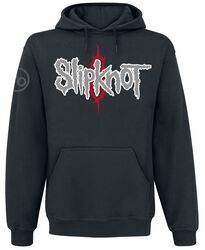 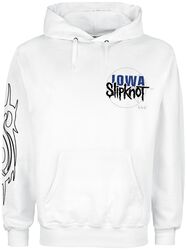 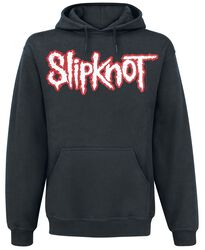 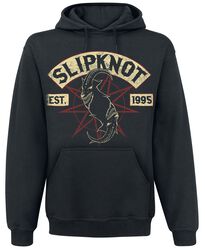 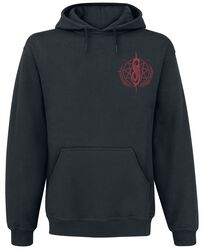 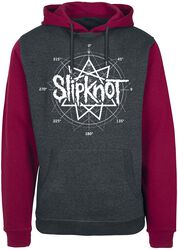 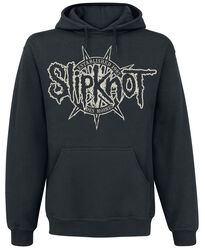 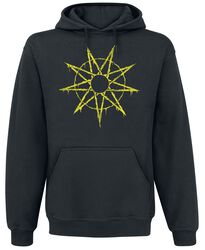 Founded in 1995, Slipknot are an American heavy metal band from Des Moines, Iowa. Characterised by chaos, in particular the shifting band memberships of guitarists and lead vocals, energy image and style sum up the band. And this energy and style has been carried forward onto the amazing Slipknot Hoodies.

In 2001, slipknot followed up their eponymous debut album with Iowa. Iowa is probably still the bands darkest, heaviest and angriest album to date (the F bomb is dropped an incredible 38 times), but this darkness only served to solidify Slipknots place in the heart of their fans. Hugely popular, the hooded "Iowa Star" sweater, tips it's hat towards the second album and is an amazing product guaranteed to please the slipknot fan in your life. Available at EMP, this black hoodie displays the typical Slipknot nonagram-logo on the chest and on the back.

With a Slipknot hoodie to a metal icon

"Tell Me The Reality Is Better Than The Dream ..." No problem - because with a Slipknot hoodie from EMP your metal look becomes reality. We have stylish tops and more for you to wear with the successful masked band. The high-quality material of our Slipknot hoodie makes you fit for the jumping masses when you really get down to "Only One" and "No Life" and brings Knotfest straight home to you with many different motifs from the band.

On Halloween 1996, Slipknot launched their successful career as one of the most famous metal bands in the world with their first album MATE.FEED.KILL.REPEAT. All over the globe, the masks of the men have achieved cult status - and not by chance! With their mix of all metal genres, it's hard to imagine the scene without the band. And at EMP, fans of the running knots can finally get what they're thirsting for - the perfect Slipknot hoodie!

Flames, smoke machines and light spectacles make every Slipknot concert an experience. And if you missed the last gig, you can now conveniently order your own Slipknot hoodie from us. We feed off the music - and we never get enough! Become part of the Maggots and eat your fill of heavy metal!

Slipknot hoodie for the festival

It's hard to top a live performance by Slipknot, but you can take your outfit straight up the charts with a hoodie from the band ... well, sort of. Long sleeves will keep you warm even at a live concert outdoors, while you can of course take the hoods off when headbanging. Large front pockets offer you enough space for snacks - or a Slipknot CD to get an autograph at the band's next gig. "Biding My Time Until The Time Is Right"

Deepness and brutal sounds go together just as well with the nu metal band as our sustainable Slipknot hoodies with cool motifs. Because a strong environmental consciousness doesn't stop with your clothes - and with EMP you can now even do something good for the environment. Marked with a green leaf, you can discover certified Slipknot hoodies in our online shop and help us steer towards a more just world.

In addition to EMP exclusive Slipknot hoodies with special motifs, you can order a lot more from us and get the full look of the band in your wardrobe. From tops to accessories to Slipknot shoes, the full world of metal awaits you in our online shop! ALL HOPE IS GONE ... but we still have a Slipknot hoodie for you. Just click in and become part of the cult band.

Whether it's "Dead Memories", "Killpop" or "Duality" - with a Slipknot hoodie for the festival, you'll be right up there with the band at their next gig. But a hoodie by the nu metal band can do even more. Because while Slipknot's legendary masks always reflect the feelings and character traits of the members, you too can show who you are with your clothes. Metal in all its genres? Then a hoodie by the masked men is just the thing for you. At EMP you can buy your own Slipknot hoodie at a great price. "You Are My Favorite ..."

All hail the goat.

The 2001 Iowa album cover depicted an animated goat head, but the 2011 anniversary edition featured an actual photo of the same animal. Then there's the Flaming Goat hoodie, Goat Reaper, Furious Goat and Goat Star Logo sweater, (which are all available at EMP). And several record stores in the UK even gave the 2001 album away to customers for free if they brought a live goat with them. That seems to be a lot of goat for one band, so what’s it all about? 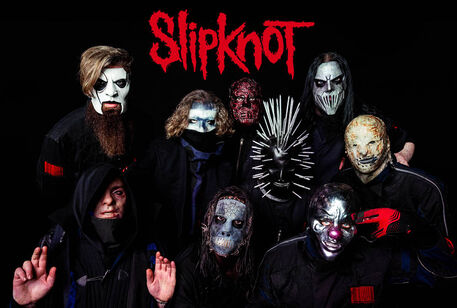 According to christian beliefs, the goat face symbolises the face of the devil or shape of the baphomet. But, like most bands, slipknot just use these symbols for publicity or to scare people - nothing more. Slipknot have openly disclosed that the use of the goat symbol is entirely for entertainment and shock purposes only. So sigh a big sigh of relief and grab some goat themed merch without worrying what your neighbour will think when you wear it.

The Flaming Goat hooded jacket from Slipknot shows a goat in flames on the back. Awesome! What's also totally awesome is that as well as including both a front and back print, crew neck and kangaroo pocket, this hoodie is available in sizes up to 4XL.

The Goat Reaper hooded sweater is an iconic hoodie from Slipknot made in the classic style of a biker cut-off. The front features the classic band logo, whereas the back looks like a classic patch. The look is finished off by a print depicting the Iowa period and the year the band formed.

The savage goat graphic on the Furious Goat hooded jumper definitely grabs your attention and makes you think of something other than the guys from Slipknot - like, I don't know, running away. The masters of the bleak and alternative have really run riot on the back of this zip up jacket, which includes a bloody print.

All hell has broken loose in metal heaven, and it's largely thanks to the legendary boys of Slipknot. Honour their amazing sound with an awesome Goat Star Logo hoodie, which features the band logo on the back and the band name on the front. As well as a classic drawstring hood, it also features cool contrasting sleeves and a divided kangaroo pocket.

Since 1995, the band from Des Moines has never looked back. Freaky stage shows are an absolute must for SlipKnot, but their sound is also distinctive and unique.The front print of the black Des Moines hooded sweater features the characteristic nonagram of the band with classic SlipKnoT lettering and the words ‘Des Moines, Iowa’ in capital letters.

More Prints - but big ones please!

In addition to the cosiness factor, something that should definitely also always be a feature of your hoodie is, of course, an iconic print. Slipknot hoodies tend towards subtle prints on the front with band lettering, Nonagram or other small motifs and filigree details that stand out. The back, on the other hand, is often much more extreme. Large prints with un-dead goats, skeletons and provocative lettering turn the seemingly inconspicuous back of the jacket into a real eye-catcher. Since the back of the garment offers plenty of space for a print, the images are usually particularly detailed as well.

Slipknot sweaters are an ideal choice for anyone who is not only into nu-metal, but also into intense colours. Corey Taylor and Co. are particularly fond of the colour red, which is not only reflected in the band's Artworts album, but also in the motifs of the Slipknot hoodies: be it the band logo (or the ever-popular goats), red is omnipresent and gives the designs even more brutality - just how a Slipknot hoodie should be.

A Top for all occasions

Slipknot hoodies not only look really casual, they also have a lot to offer in terms of comfort and functionality: The hoodies are your perfect companion for travelling, playing sports or snuggling up when it's cold outside. If it’s a little cooler than expected at your next festival then you’ll be well equipped with a slipknot hooded jumper. The zip-up versions are particularly practical because of how easy they are to put on and take off. In addition, the hoodies can be combined with pretty much any of your favourite T-shirts or jeans.

At EMP we’ve got a tonne of merch to celebrate ‘the Knot’ and with fast delivery, daily offers and easy returns, if we are not your kind, then we don’t know who is.