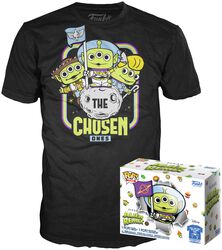 “You're a toy! You aren't the real Buzz Lightyear! You're an action figure! You are a child's plaything!” – Woody’s famous outburst in 1995’s Toy Story might’ve been implying being a toy was something of a hindrance, but we’re flipping that narrative with our incredible collection of Disney toys.

Disney toys help bring home some of the magic of the House of Mouse and its enduring legacy. From films shown on the big screen to visiting the Magic Kingdom, a Disney toy lets you keep a spark of that joy.

Founded in 1923 and releasing its first Mickey Mouse cartoon five years later, Disney has grown to become a dominant figure in pop culture, and our selection of Disney toys reflect all facets of the franchise. From Marvel toys to more traditional toys celebrating the Disney princesses and classic animations, there are Disney gifts and toys for everyone.

EMP is a great place to start your new Disney toy story. Step into a magical world with exciting Disney toys, dolls and games. Younger children will benefit from these Disney toys as they bring a sense of fun into functionality, with the immersive and interactive toys helping to spark their imaginations, develop skills with colours and shapes and more.

The Disney Toy of your choice

Inspire their sense of adventure and playfulness with toys inspired by all their favourite characters. There’s Olaf cuddly toys, Mickey and Minnie Mouse train sets, paint-by-numbers Lion King games and so much more. Bring the whole family or crew together on rainy days or lazy days. Our Disney toys include a range of interactive puzzles and games, including Disney playing cards and a Frozen inspired 3D puzzle.

The kids might be alright, but our Disney toys are for people of all ages – just like Disney itself. Included in our Disney merch is Funko POP! Disney toys and collectibles. Funko POP! figures have become commodities for collectors and pop culture lovers. The world of collecting used to be limited – there were toys for kids but not much else with deeper substance. Funko Pop reimagined what fandoms would want, creating highly stylised, sleek, and quirky vinyl figures. If you want to feel the Funko, our Disney Funko figures include characters from the Little Mermaid and Toy Story.

Your toy story guarantees a happy ending thanks to EMP’s Disney toys – but your Disney story doesn’t have to stop there. Check out the full range of licenced Disney merchandise including clothing, accessories and gifts.