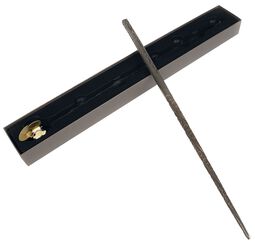 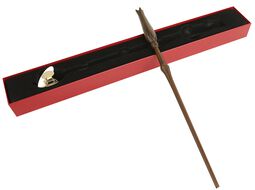 In Harry Potter, magic wands are used to light hallways, conjure feasts, clean dishes, decorate christmas trees, curl eyelashes, torment fellow students and sometimes even for their original purpose - to help witches and wizards cast magic spells. Although every instrument is perfectly matched to its owner, witches and wizards often use each others - In fact the first person to use Harry Potter's wand isn’t Harry Potter.

The first mention of these spell-casting instruments occurs in chapter 4 of the philosophers stone (1997), which is the first book in the 7 book series. A throwaway comment about ‘spell books and wands’ is made by Harry Potters mean Uncle Vernon, who, of all the characters in the books, probably dislikes magic the most. Uncle Vernon tries to stop Harry Potter attending Hogwarts school of witchcraft and wizardry and makes the comment during an argument with the schools gamekeeper Hagrid, who has come to collect Harry and help him shop for school equipment ready for his first term.

Nearly every witch or wizard, from Ron weasley's mother to the headmaster of Hogwarts, is referenced at some point owning, holding or using a magic wand, indicating how essential they are in the magical wizarding world. A wand is also included on the list of essential school equipment given to new first years starting at Hogwarts school of witchcraft and wizardry. Other items include, 1 Cauldron (pewter, standard size 2), 1 set of glass or crystal phials, 1 telescope, 1 set of brass scales!

Snapping a Wizard's Wand in Half

In Chapter 4 of the philosophers stone we learn that Hagrid had his wand snapped in half after he was expelled from Hogwarts in his third year, which tells us that this symbolises a loss of reputation in the magic world. Snapping a wand in half is referred to several more times throughout the books, and is always associated with a loss of dignity or respect.

We are introduced to liquorice wands as a treat found on the food cart pushed through the corridors of the Hogwarts express during Harry’s first ever journey from platform 9¾ to Hogwarts. They are also listed amongst Dumbledores favorite sugar treats, which also includes sherbet lemons, Pear Drops, Fizzing Whizbees, Drooble's Best Blowing Gum, Bertie Bott's Every Flavor Beans, chocolate frogs, sugar quills and cockroach clusters.

Ollivanders Wand Store - Makers of Fine Wands Since 382 B. C.

Ollivanders store sells the ‘best wands’, and a trip to Ollivanders is a rite of passage for every witch and wizard. Every wand contains a core of powerful magic substance, such as unicorn hair or the heartstrings of dragons, and just as no two unicorns or dragons is the same, no two wands are the same. Although witches and wizards often share the owner of Ollivanders tells Harry that “of course, you will never get such good results with another wizard's wand."

After measuring Harry from head to toe with a tape measure, Mr Ollivander gives Harry Potter the very first magic wand that he ever holds. It’s made from Beechwood and Dragon Heartstring and is 9 inches long. Mr Ollivander also tells Harry that “it's really the wand that chooses the wizard” and Mr Ollivander tries a number of different wands including maple and phoenix feather, and ebony and unicorn hair.

Mr. Ollivander tries almost every item in the store in order to find the right match for Harry, but none of them seems to want to pick him. That is, until he holds an 11 inch wand made from Holly and Phoenix feather. As soon as Harry holds it he feels a warm sensation in his fingers and when he waves it around a stream of red and gold sparks shoots out of the end like a firework.

According to Mr. Ollivander the ‘curious’ thing about Harry Potter's wand is that it is one of a pair. The phoenix that gave the tail feather that is the ‘magical core’, gave only one other feather, and it is in the wand of Lord Voldemort. The phoenix in question is also Fawkes, which is the phoenix bird that belongs to the headmaster of Hogwarts, Professor Albus Dumbledore.

How Much Does Harry Potter's Wand Cost?

Harry paid seven gold Galleons for his first ever wand, which he purchased from Ollivanders.

What is Harry Potter's Wand Made From?

Harry Potter's wand is made from Holly and Phoenix feather

How Long is Harry Potters Wand?

Where Can I Buy a Harry Potter Wand?

Online at EMP, from our Harry Potter Shop.

Albus Dumbledore - The most powerful wand in the history of wizardkind belonged to Professor Dumbledore for a long time. The so-called "Elder Wand" is one of the three Hallows and it wins every magic duel. The original is made from the wood of the elder bush and the core contains the tail hair of a Thestral. You can get your hands on this prized possession and ensure that you succeed with all your magic spells by visiting the EMP Harry Potter store.

Professor Snape - We are often told in the Harry Potter books, not only how long a wizard's wand is, but also what it is made from, however Severus snape remains a bit of a mystery. In Chapter 27 of Harry Potter and the Half Blood Prince, professor snape killed Albus Dumbledore. It is however, this fact that ultimately causes his own downfall. According to Lord Voldemort, a wand can only truly belong to the person that killed it’s previous owner, therefore in order to transfer ownership of the powerful elder wand to himself, Lord Voldemort must kill professor snape. It is unknown what happens to Severus Snape's wand after his death at the hands of the dark lord, however it’s possible that it was buried along with his body, which would have been common practise in the wizarding world.

Hermione Granger - From the books, we know that the first person to use Harry Potter's wand isn’t Harry Potter, but in fact Hermione Granger. Harry Potter, Ron Weasley, Hermione Granger & Neville Longbottom are out of their dorm room after bedtime. Hermione snatches Harry’s wand out of his hand when they hear a teacher approaching and casts a spell that helps them avoid getting caught breaking the rules. You can buy both Harry and Hermiones wand from the EMP Harry Potter wand store.

Wandlight - light emitting from the tip of a wand after the “Lumos!” incantation has been used
Wandpoint - similar to gunpoint, e.g. Harry had Lockhart at wand point
Wand lore - the ancient and mysterious branch of magic dealing with the history, abilities, and actions of wands
Wandless - a state of being when a witch or wizard finds themselves without their wand
Wand arm - the arm favoured by a witch or wizard for casting charms and curses
Wand-tip - the tip of a wand
Wand-trees - trees whose wood is of a wand quality

“Accio Wand!” - At EMP we’ve got wands available from all your favourite Harry Potter Characters - so summon yours today!