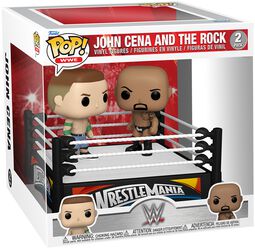 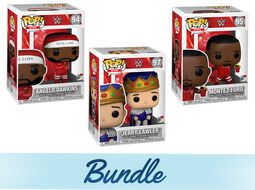 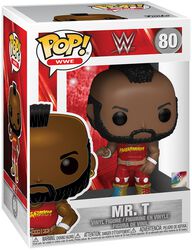 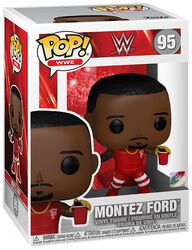 If the tables are broken, shirts are torn, athletes fly through the air and sweaty men want to throw each other on the floor, then that can only mean one thing. It’s wrestling time! Every year millions of fans sit in front of the TV and watch WrestleMania and the WWE is now the largest wrestling league in the USA. Join in the fun with WWE fan products from the EMP online shop.

"World Wrestling Entertainment" or WWE for short is the most famous wrestling company in the world. Founded in the 1930’s by Roderick James McMahon it was called “Capitol Wrestling Federation” initially. Rodericks son Vince McMahon took over the company in 1948 and organized its first wrestling events. In 1979 the organization was renamed "World Wrestling Federation". However after a legal dispute with an international environmental organization due to the logo, the name was eventually changed to "World Wrestling Entertainment" in May 2002.

Of heroes and monsters

The WWE has a lot to offer: from breathtaking action and frightening formations to oversized muscles and legendary finishers. Together with friends, a few bags of chips and cold beer, thousands of people watch the fights with excitement.

Feuds between good and bad have always created the tension at these events and Legends like Hulk Hogan, Bret Hart, The Rock, Steve Austin, Mick Foley, Chris Jericho, Daniel Bryan and Kane will never be forgotten. When the lights go out in the ring and a kerosene lamp can be seen in the distance you know it’s time for the Wyatt family. Their chief Bray Wyatt leads his sheep Erick Rowan and Luke Harper into the ring. The Wyatts ooze madness and as soon as the flame goes out, the enemy should be on guard!

Then another wave of horror, the cemetery bell sounds and everyone knows: the gravedigger is coming. With his long black leather coat, large hat and gloves, “The Undertaker” is a more than impressive figure who has had an amazing wrestling career. Until the 30th WrestleMania, the gravedigger was the only WWE-Wrestler who hadn’t lost a single fight in the big event. No true wrestling fan will forget the moment in wrestling history when the Undertaker was beaten by Brock Lesnar on April 6, 2104. The Undertaker's career had been 21 to 0 until then and for minutes afterwards the audience stood with their mouths open and their hands clasped over their heads, unable to believe what had happened!

As well as power houses like Brock Lesnar, there is also “The Demon” - Kane. The way he pulled Brie Bella through the floor of the wrestling ring into his hell fire is probably unforgettable to this day. Daniel Bryan and Kane were once team partners and Brie is Daniel Bryan's wife. But well, that's wrestling for you - friend today and enemy tomorrow - just like ‘The Shield’. This triple combo consisting of Seth Rollins, Roman Reigns and Dean Ambrose was torn apart when Rollins defected to the “Authority”.

As scary as the wrestlers look, outside the ring they are perfectly normal people! Who's not upset by the fact that Kane has a university degree in teaching English? Or that Hulk Hogan wanted to run for president in 2000? Yes, exactly, Hulk Hogan with his bright yellow shirt and sunglasses.

The EMP WWE Online Shop has everything a wrestler's heart desires. Merchandise ranges from classic WWE T-shirts to collectible WWE Figures. Sting and John Cena can move into your home and if you don’t like Funkos how about collecting WWE mugs instead. With motifs by Dean Ambrose, John Cena and the Undertaker, your morning coffee will be a bit heavier.

Any outfit can be spiced up with WWE merchandise and you will find a large selection of shirts in the EMP WWE online shop. There are designs from The Undertaker, The Ultimate Warrior or the Attitude era - or let things get even more colourful with the yellow shirt of the ""Booty O's"".

You will find loads of fan products in our online shop so get rummaging, “Yess! Yess! Yess!”. Those who prefer to watch big action-packed events will find a number of DVDs such as Wrestlemania 32 and Summerslam 2016. And if you haven’t had enough of sports merchandise yet then check out EMP’s NFL Shop.