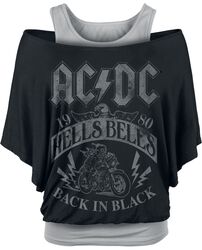 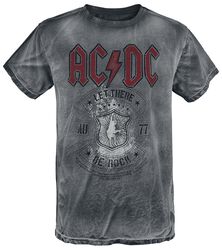 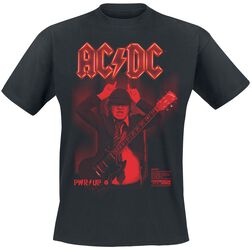 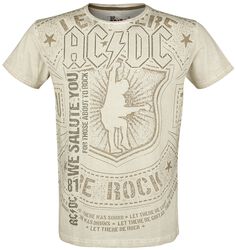 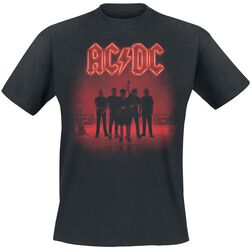 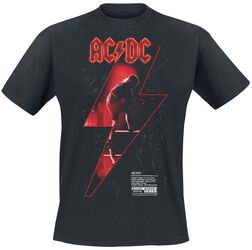 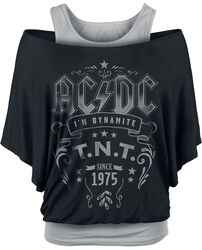 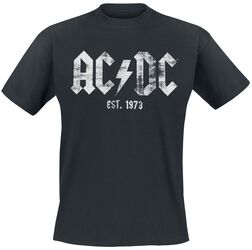 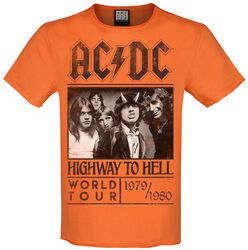 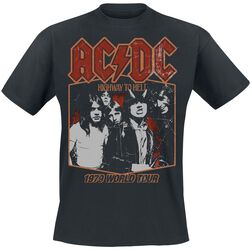 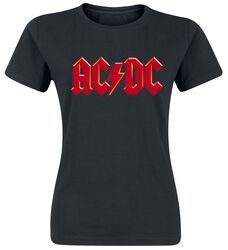 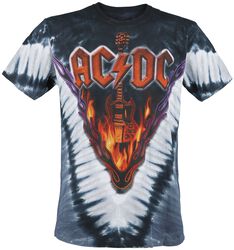 The gentlemen of AC / DC have been releasing one high-flyer album after the other for more than 40 years. From “High Voltage” to “Rock or Bust”: in our AC / DC T-Shirt online shop you will find the right shirts for men and women for a wide variety of Australian albums. Travel with us back to the beginnings of Angus Young and Co. The success story of AC / DC began in 1973 at the Checkers Club in Sydney. Okay, admittedly: at this point the formation around Angus and Malcolm Young only played cover songs by the Beatles and the Stones. Back then, no one believed that AC / DC would one day become one of the greatest rock band of all time.

In 1974 the first single “Can I Sit Next to You Girl? / Rockin 'in the Parlour” recorded with singer Dave Evans. But the single didn't really go down well. For the Young brothers it quickly became clear: the problem was with singer Evans. Without further ado, Evans was kicked out of the band and replaced by Bon Scott.

Your favourite shirts from the AC / DC Bon Scott era

A short time later AC / DC released their debut album "High Voltage". To this day the album is a classic of the hard rock and rock'n'roll scene. Of course you will find different AC / DC T-shirts to match the High Voltage album. With “TNT”, AC / DC followed suit. Other legendary albums then followed such as "Dirty Deed Done Dirt Cheap", "Let There Be Rock", "Powerage" and "Highway To Hell". Of course we have a wide variety of AC / DC shirts for all the albums. In addition to classic, black shirts, you can also stock up on coloured AC / DC shirts with us. The best thing: many AC / DC T-shirts are exclusive to EMP and only available from us.

Discover our large selection of AC / DC CDs in the EMP Shop now. There are also many AC / DC Albums in the EMP online shop.

AC / DC shirts and more from the Brian Johnson era

After "Highway to Hell”, AC / DC's band history was put to the test for the first time: singer Bon Scott died of alcohol poisoning in his car. The end of AC / DC was imminent. But for Bon's sake, the Australians continued. Without further ado, Brian Johnson took over the vocal oar. Since Bon Scott passed away in the middle of the recording of "Back in Black", Brian Johnson was shipped straight to the studio.

A short time later the most famous and legendary album in rock history was released: "Back in Black". This was followed by other rock'n'roll classics such as "For Those About to Rock (We Salute You)" or "Stiff upper Lip". And even in the 21st century, Australians have proven that they know exactly what hard rock should sound like. Just listen to albums like “Black Ice” or “Rock or Bust” once.

Dress up with our AC / DC shirts to match your favourite albums. In our AC / DC Shirt Shop you will find a wide variety of colours, motifs and fabrics. Either in classic black or in striking colours. You can find more AC / DC merchandise in our EMP AC / DC shop.

With the Black Premium by EMP Signature Collection you get exclusive AC / DC shirts that are only available from us. From matching shirts for the “For Those About To Rock (We Salute You)” album to shirts with guitar legend Angus Young - you will find everything here in the best quality. Just put it on and you are perfectly dressed for everyday life or for the next concert or festival.