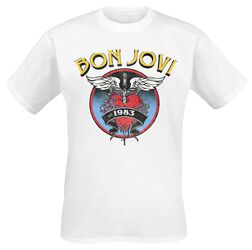 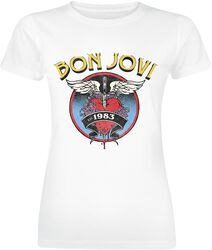 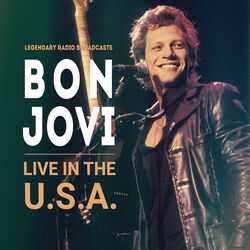 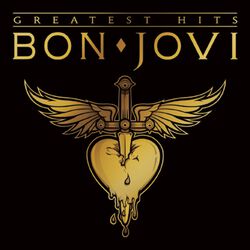 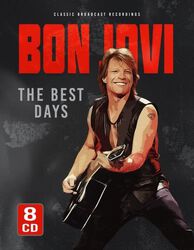 Whooooooaaaaaaaaa, we’re halfway there – actually, scrap that. If you’ve been livin’ on a prayer that you’ll find some of the best Bon Jovi merchandise around - you’re all the way there.

We’re going to let you in on a secret. It’s ok to admit you like Bon Jovi. Over 100 million people have bought a Bon Jovi record, after all. Aware of the snobbery that sometimes surrounds them, Bon Jovi even released a boxset of demos and B-sides called ‘100,000,000 Bon Jovi Fans Can't Be Wrong’ in 2004. There was a period where music elitism confused commercial success with selling out, or not being true to rock, but the truth of the matter is, Bon Jovi have always delivered stadium-sized rock that connects with each fan on a personal level.

From the power balladry of "Always" to the too-hard-to-resist, let-it-all-out-and-shout-along anthem "Livin’ on a Prayer", Bon Jovi’s hits aren’t just big, they’re epic. Not bad for a band with humble beginnings, starting out in New Jersey.

Jon Bon Jovi, Richie Sambora, Alec John Such, David Bryan and Tico Torres were the forming members of the band – which got its name from lead singer Jon Bon Jovi’s surname… sort of. His actual name is John Francis Bongiovi Jr.

After finding their sound, Bon Jovi released their first two albums in 1984 and 1985. They managed to crack the top 40 with their debut single, "Runaway", but true success would come in 1986. The release of their third album - "Slippery When Wet" – saw the New Jersey rockers go global. The album has sold in excess of 28 million copies worldwide and included numerous smash hit singles that have become rock staples – and karaoke classics – including "You Give Love a Bad Name" and "Livin' on a Prayer". A remastered, re-released Slippery When Wet LP is one of the gems you’ll find across our Bon Jovi merch store.

The band had officially ‘made it’ – so much so that Bon Jovi were the first band officially sanctioned by the Soviet government to perform in the Soviet Union, and their fourth album, titled "New Jersey", became the first American album released legally there.

However, fans weren’t kept waiting too long until Bon Jovi answered their prayers and returned. Coming back strong, the band’s first single after reuniting would become one of their most successful. 2000’s "It’s My Life" is something of a rock anthem, nominated for a Grammy and propelling the band up the charts across the globe again.

Though they take breaks here and there, Bon Jovi never really go away. They’ve kept a steady momentum over the years, and they're still recording. Jon Bon Jovi confirmed that the band’s latest album is in the works but was delayed by the Covid pandemic.

While you’re waiting for your next Bon Jovi album, why not revisit some classics from our Bon Jovi merch? From Greatest Hits albums to live recordings from their tours, our Bon Jovi store offers the very best official merch.