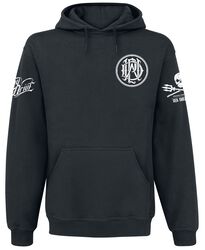 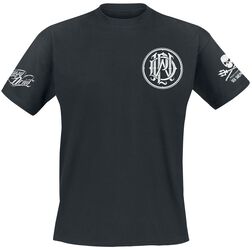 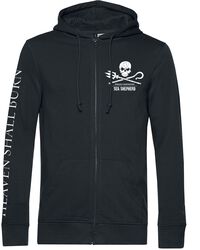 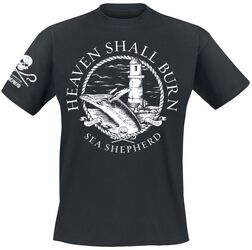 £23.99
Sea Shepherd Cooperation - For The Oceans   Heaven Shall Burn   T-Shirt

Water. One of the elements. The giver of life. Oceans and other bodies of water make up the bulk of planet Earth, and they are the ecosystem with the most biodiversity – meaning there’s more life off land than on it. A wide variety of creatures cavort in the world's oceans: small microorganisms, all kinds of fish and animals of gigantic sizes, like the magnificent blue whale. The oceans are also home to many plant species that are vital for marine life – and life on solid ground. Algae, also called phytoplankton, produce a large part of the oxygen that humans and animals breathe.

As important and powerful as the oceans are, the natural balance of water is disturbed by humans. Be it floating nets in which marine life get caught, or plastic waste that accidentally ends up in the stomachs of fish and birds, the destruction of the world's oceans is only getting worse.

It’s a problem facing the entire planet, but luckily there are plenty of people prepared to make a change. One drop is all it takes to turn the tide and inspire the sea change – enter Sea Shepherd, an organisation that works for the protection of the world's oceans and the preservation of marine life.

Who are Sea Shepherd?

Sea Shepherd is an international, non-profit organisation founded in 1977 by Captain Paul Watson. In its mission to protect and defend marine life, Sea Shepherd is supported by many volunteers, both on land and at sea. The financing is based exclusively on donations, which is why fundraising is an essential part of the organisation. Everyone is welcome to pitch in and help at Sea Shepherd – the water gives life to all, so all should be able to help protect it.

Sea Shepherd's goals are clear - defend the interests of marine life and take non-violent action against illegal activities. The group has been active in intervening against fishing and poaching in the South Pacific, the Mediterranean, and in waters around the Galapagos Islands.

The organisation's ideals and goals are visualised in the distinctive Sea Shepherd logo. The Jolly Roger may initially look like a typical pirate flag, but there is more to the skull than meets the eye. The skull stands for the suffering and death that people bring across the oceans. Neptune's trident together with the shepherd's staff symbolize the protection and preservation of marine life and the determination to fight for their well-being. Yin and Yang, depicted as whales and dolphins, represent the goal of rebalancing the marine ecosystem.

We’re not just selling Sea Shepherd merch with our range of clothing and accessories, we’re supporting a cause we think has depth. Through our co-operation with Sea Shepherd, we also want to help protect one of the most unique habitats on our planet. In the EMP online shop you will find a variety of products, including Sea Shepherd t-shirts, hoodies and other bits – all Fairtrade and made from 100% organic cotton. In addition, we do not use plastic bags for shipping. And for every sale, we donate a portion to the organisation. Make a sale. Help a charity set sail.

If you’re inspired by our Sea Shepherd shop to do more, how can you – one drop in the ocean – make a difference? Here are some tips for being ocean-friendly:

Are you interested in more cool clothes, shoes or accessories? Then take a look at our other brands: