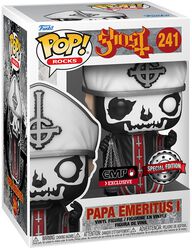 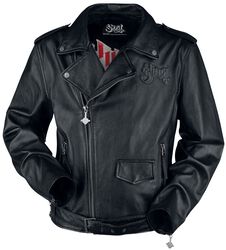 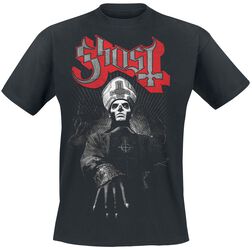 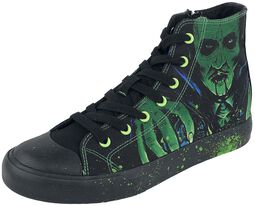 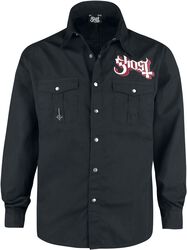 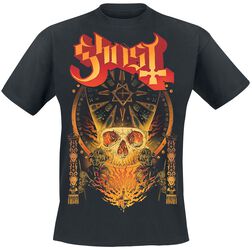 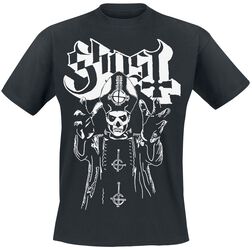 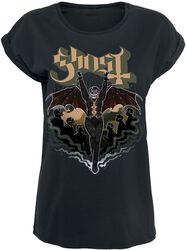 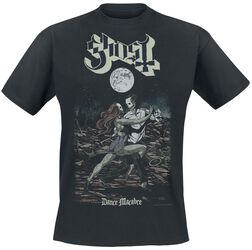 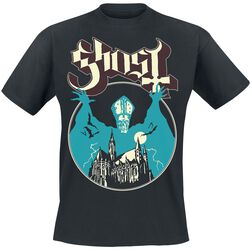 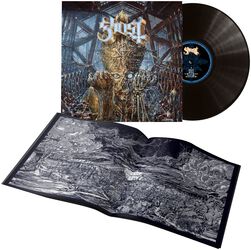 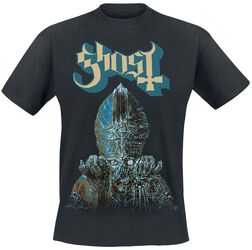 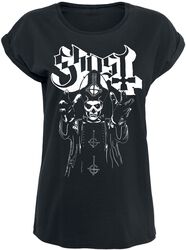 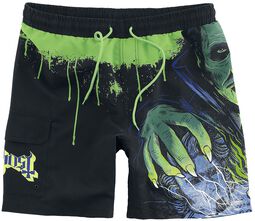 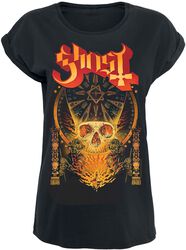 Ghost merchandise at EMP, this Opus Eponymous is stocked with great fan products. From the debut to the latest album, you'll find tons of Ghost CDs and vinyl LPs. But there’s also other band merchandise waiting for you: numerous Ghost t-shirts, hoodies, patches and much more.

One or two pretty good metal bands have been known to emerge from beautiful Sweden. But what came together in Linköping in 2008 was something really unique – a six-piece group of musicians who formed a band, wanting to become known for their songs, but without giving away too much about their private lives.

This eventually became their trademark. They gave themselves the name Ghost and kept their identities a secret. At this point, only their singer had a name: Papa Emeritus – the face of the band - a face that was painted like a skull, whilst the rest of him was dressed in a long papal robe. Well, this was how it was until 2018, when Papa Emeritus was replaced by Cardinal Copia on album number four – ‘Prequelle’. Of course it was only the name that changed though. The singer behind the pseudonym remains the same – accomplished composer Tobias Forge.

Of ghouls and the ghostly pope


The remaining musicians in the band are known only as nameless ghouls: ‘Alpha’ (guitar), ‘Ether’ (guitar), ‘Water’ (bass), ‘Air’ (keyboard) and ‘Earth’ (drums). The nameless ghouls’ identities are completely hidden behind their black and brown capes, giving the band its rather particular image. However it’s not just their image but also their unique sound that sets them apart from other bands.


Their debut album 'Opus Eponymous' was released in 2010 by the British label 'Rise Above'. The album was a huge success and the label was able to send the six Swedes off on tour without a hitch: Appearances alongside bands such as Mastodon, In Flames and Trivium followed.


Papa Emeritus and the Nameless Ghouls also put on an excellent live show, capturing audiences’ attention with their quirky image. Then, after passing their tour test with flying colours, the musicians headed back to the studio. Before this could happen, though, Papa Emeritus I had to step down and handed his sceptre to Papa Emeritus II - who wore the same robe and makeup, but brought with him a new vocal style.


With the new Papa at the helm, the ghouls came back with their second album, entitled ‘Infestissumam’ (2013), accompanied by a small name change. So that the album could also be released in the USA and the band would be able to tour there, they had to change their name. Commercial use of the original name was not possible so they added ‘B.C.’, becoming 'Ghost B.C.' in the United States.


'Infestissumam' blew fans away with sacral passages, Moog synthesizers, orchestral vocals and hard rock. In addition, the incomparable voice of Papa Emeritus II and profound lyrics made it the perfect album. Overall, both Ghost albums proved that both the nameless ghouls and their lead vocalist are gifted musicians. However, in 2015 Papa Emeritus II was also to pass on his microphone to another.


He was succeeded by Papa Emeritus III, along with another new album. As 'Melior' hit stores in 2015, the third ghostly pope proved what he was made of. The use of organs, a variety of styles, and fantastic vocals meant that 'Meliora' was easily as good as its predecessors. Meanwhile, the ‘B.C.’ disappeared from the name once again, as the name rights only applied in the USA.


With the announcement of their fourth album, Papa Emeritus III was sent into well-deserved retirement, to be replaced by the new frontman Cardinal Copia. As it seems, the era of Papa Emeritus is finally at an end.


Studio album number 4 sees the Swedes dealing with the themes of the Plague, the apocalypse and the dark ages. The first single ‘Rats’ already made it clear that the album would have no trouble following on from the success of the preceding albums and the ‘Popestar’ EP. If you liked the songs on the debut album ‘Opus Eponymous’, you’ll love the 4th studio album!


Love Swedish heavy metal à la Ghost? Then pay a visit to the EMP Ghost online shop. Shop our Ghost Merchandise online right now and get kitted out for the next live show.


On the look-out for even more great metal bands? How about Behemoth, Gojira or Lamb of God? What are you waiting for? ➤ Check them out now!