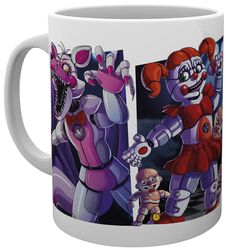 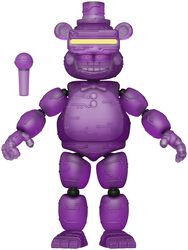 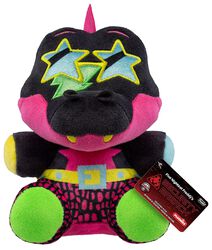 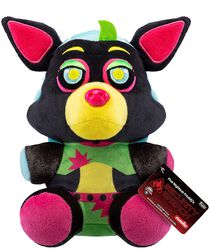 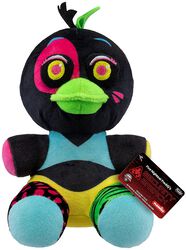 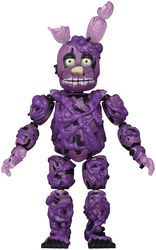 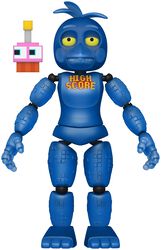 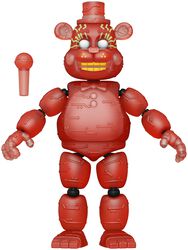 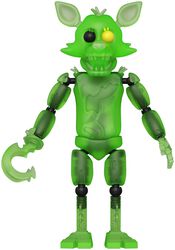 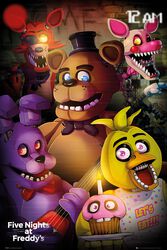 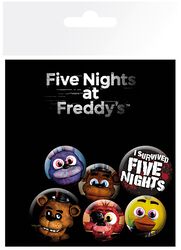 An attractive range of fan merch awaits you in the EMP Five Nights at Freddy's online shop. With our officially licensed products in the range, you will always have the characters from your favourite game with you.

Dress up in the Five Nights at Freddy's fan shop or get Freddy Fazbear, Chica the Chicken, Fox the Pirate and Bonnie the Bunny as collectible figures for your home.

The indie game Five Nights at Freddy's has already given numerous players many sleepless nights. The imaginatively implemented game by Scott Cawthon puts you in the role of the security guard Mike Schmidt.

Your task sounds very simple at first. For $120 you can do five night shifts in the very shabby pizzeria "Freddy Fazbear's Pizza". Happy about the easy money at first, then the phone rings during the first night shift and your predecessor warns you about so-called animatronics.

These are the earlier characters and stars of the pizzeria who become mobile and homicidal after-hours and want to get to the security office, which you must defend in your virtual world. What sounds funny is actually pure horror, because if they manage to get into your office, then it's game over.

The animatronics 'Bonnie the Bunny', 'Freddy Fazbear', 'Fox the Pirate' and 'Chica the Chicken', like to force the night watchmen into an animatronics costume with eyelets and pointed screws on the inside. Not a nice thing, you think to yourself and you will have to use a few tricks to ward off danger.

The surveillance cameras help you to closely follow the activities of the animatronics. If one of the monsters is at your door, then it is time to close it. The only problem is that the energy supply is so poor that you can only close the security door in emergencies. If there is no energy, locking it is impossible. If an animatronic gets into your office, then you have a really serious problem.

Five Nights at Freddy's merchandise as a great gift idea

The computer game, launched in August 2014, has many fans around the world. The Five Nights at Freddy's online shop from EMP therefore offers you the opportunity to order gift items online for all lovers of this point-and-click game.

How about, for example, a plush toy or an action figure from Bonnie the Bunny, Chica the Chicken, Freddy Fazbear or Fox the Pirate as the perfect Five Nights at Freddy's fan product? The figures are also available as Funko Pop! figures. These cute collectible figures are around 10 centimetres high and have oversized heads. They are particularly suitable as a souvenir, but also as a decorative item in your home.

Those who love survival horror are sure to enjoy the FNAF accessories too. A key ring, umbrella or mug with Five Nights at Freddy's logo is always a practical gift idea.

And it's not just FNAF - you will also find Minecraft, Fallout and Resident Evil merchandise that you can stock up on again and again.