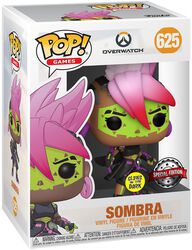 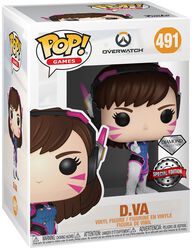 Have you only heard stories about the Omnic Crisis 30 years ago? Can you not even imagine a world where robots and humans coexist peacefully side by side? Then you know the taste of lead on the tongue and the smell of kerosene in the nose as the Omnics break through the defences. So, grab your rocket hammer and jump into the storm of cannons and the rain of fire - with the Overwatch Funko POP! figures you’ll always have a team of loyal teammates by your side in the field. The Earth is still not safe and your career as a brave agent in the battle for the planet has just begun ...

What was it that McCree said? ‘I'm not good. Not bad. But I sure as hell ain't ugly’ – a statement so rugged and gloriously self-deprecating that it can probably only come from the world-famous shooter Overwatch. And if we have to take a stance, we prefer the word "unique". Speaking of unique - that's exactly what the Funko POP! figures from the game are: rich in detail, cheerful and ready for anything! Of course every figure has the characteristics, features and extras that are typical of their character.

Whether on top of your computer, on your desk or on your DVD shelf, Overwatch Funko POP! figures look just as great alone or in a team. And speaking of teams, who says you cannot get reinforcements in the fight for the Earth? Have you always wanted to see a crossover between Marvel, Star Wars and Overwatch? Then combine your favourite Funkos from all film genres and bring an extra dose of vinyl power directly from the EMP shop to your home - "Doomfist", "Junkrat" and "Pharah" are waiting!

Search for a Funko hero, find your destiny

Can’t stop playing the game? Then you’re just like us, because a world that is so full details, imaginative places and creative characters can’t help but inspire you. As an experienced player, you surely know the story of Overwatch, a program that gathers all the nations of the world to save the human species from the Omnics. And now you're here, just like your heroes from the 6v6 shooter. So, will you join the contract killer "Widowmaker", the highly efficient healer "Mercy", or the battle-hardened cyborg "Genji"? Whatever you choose, your Overwatch Funko POP! figure will always be loyal to you on your way to victory. So, put your team together and create the most powerful Funko Pop! collection your opponents have ever seen!