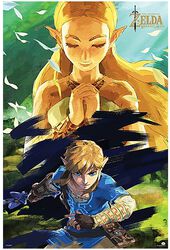 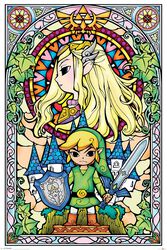 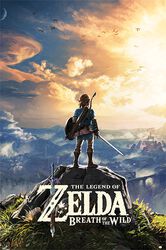 Poor Princess Zelda. She’s been waiting a long time for Link to break her free. Maybe if she had some of our Zelda posters hanging up on her castle walls, captivity wouldn’t feel as bad…


Of course, we jest. How obnoxious would it look to have posters of herself on her walls? These Zelda posters are for you only. Fans of the game get to bring the action offline and into their university halls, bedrooms at home or any other blank walls that need livening up.


Since the release of The Legend of Zelda in 1986, the series has grown into a crowning achievement in gameplay and storytelling. Across over 20 entries on all of Nintendo's major game consoles (including a number of spin-offs), The Legend of Zelda’s games have sold over 80 million copies and make for a frequent presence across gaming’s ‘all-time greatest’ lists.


The Legend of Zelda follows the adventures of Link, the elf-like young hero of Hyrule and wielder of the legendary Master Sword. Link must rescue Zelda, the beautiful and wise royal princess of Hyrule, from the evil warlord Ganondorf (or sometimes known just as Ganon, his demon alter-ego) who seeks to rule over Hyrule through the legendary powers of the Triforce.


The Triforce is an ancient relic that grants a wish to the one who possesses all three parts: power, wisdom, and courage. If a person with a good soul gets the Triforce, the world will know peace. However, if one of evil touches it, the world will plummet into eternal darkness. Over the years, the lore and mystery of Zelda has grown and evolved – and these new chapters, characters and storylines are all reflected in our ever-growing collection of Zelda merch. Our licenced Zelda merchandise includes everything from clothing to Zelda posters, framed pictures and other bits of décor.


A stunning bit of artwork, one of our Zelda posters includes a stained-glass effect illustration, capturing Link and the Princess Zelda in the style of old school saints and heroes. It’s truly a statement piece for any room. We’re always adding new styles to our Zelda posters and pictures so keep checking back for stand-out finishing touches for your decorating needs, or picture-perfect gifts for Zelda fans.


When you’re through giving your room a legendary flair, why not give yourself the same treatment? Our Zelda merch includes everything from t-shirts and other clothing to collectibles and cosplay weapons – you could say we’ve got the A to Z(elda) of gaming merchandise.