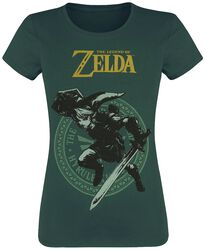 Why does Ganon hate using the internet so much? There are too many Links. If you wish we’d quit it with hilarious jokes like that, you’re in luck, we’re zipping it up…


There are games that have been around a while, and then there’s Zelda. Not just a Nintendo game, The Nintendo game. An iconic landmark in gaming, the evolution of Zelda throughout the franchise has become a tentpole in the industry, always innovating and changing its own legend while inspiring countless other games that came after.


Since the original The Legend of Zelda's release in 1986, the series has grown into a crowning achievement in gameplay and storytelling. Across over 20 entries on all of Nintendo's major game consoles, as well as a number of spin-off, The Legend of Zelda’s games have sold over 80 million copies and make for a frequent presence across gaming’s ‘all-time greatest’ lists.


Whether you’re in the market for a new comfy jacket for those days when you’re committed to a marathon gaming session or you just want a new hoodie to help you get out the door quicker, a Zelda jacket will get the job done.


With design options including crests and symbols that any Zelda fan will recognise to illustrations and artwork of the locations and characters, these jackets will help you merge function with fashion, Durable and easy to wear with any outfit, give your everyday essentials a legendary edge today.


When you’re kitted out in your new favourite Zelda jackets, don’t forget to check out the rest of our Zelda merch. From matching t-shirts and other clothing to posters and cosplay weapons, we’re the people to link you up with the best.