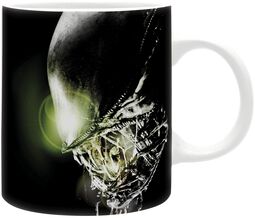 In space, no one can hear you scream. But they can still check out your Alien t-shirt.

Alien merchandise is actually a huge thing – unusual for such a scary, violent film. There’s even an entire day where new Alien merch gets released for fans. The date for Alien Day, April 26, is a reference to the moon on which Aliens, the sequel to the original 1979 movie, is set — 'LV-426'.

Alien Day in the past has involved the launch of special releases, including novels, comic books, video games, clothing and other Alien collectables. But Alien Day isn’t where the obsession with Alien merch started – that goes all the way back to 1979. Like most things, the story of how Alien merchandise became a thing is almost as interesting as the film itself. And allegedly it all has to do with another huge franchise set in space.

After Star Wars became a juggernaut of a franchise, an American merchandise company rushed to snatch up the rights for a new movie directed by Ripley Scott. Alien wasn’t quite the film they were expecting, if rumours are to be believed… considering it was not a family-friendly space opera, but rather a claustrophobic, chilling tale of a space crew who become entangled in a dangerous race to survive against a species of murderous, xenomorphic aliens. Still, capitalism can’t be beaten and Alien merchandise became a runaway hit – action figures, board games and more became instant must-haves for fans and collectors.

Alien merch remains a must-have as the film’s legacy has grown and grown – bursting into the hearts and minds of new generations. Merchandise from our Alien shop includes replica t-shirts of the Nostromo crew, the doomed spaceship whose crew were to find themselves facing off with the Xenomorph. You can also have your own Alien at home, with a Vent Attack Xenomorph Alien statue.

Alien and Alien Vs Predator

The film is a sci-fi classic, often imitated but rarely bettered. It catapulted a new sort of horror film into the consciousness, replacing generic slashers with close, quiet, hold-your-breath stillness. It also premeditated the #girlboss genre of kick-ass women, with Sigourney Weaver’s Ripley an unforgettable hero. The success of Alien spawned sequels including "Aliens" (1986), "Alien 3" (1992), and "Alien Resurrection" (1997). A crossover with the Predator franchise produced the Alien vs. Predator films: "Alien vs. Predator" (2004) and "Aliens vs. Predator: Requiem" (2007). The Alien canon got fresh additions when original director Ridley Scott returned for a prequel series including "Prometheus" (2012) and "Alien: Covenant" (2017).

No matter which Alien film is your favourite, at EMP you will find merchandise just bursting for a place in your heart