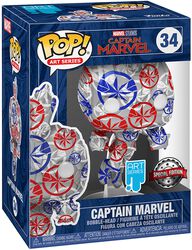 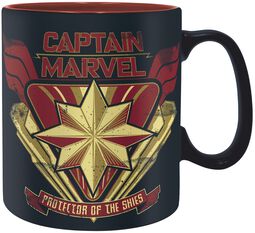 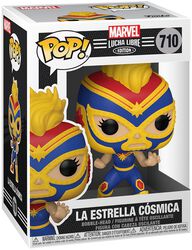 Captain Marvel is no less than the most powerful member of the Avengers and the biggest MCU superheroine of all times. In the comics she can fly, has supernatural endurance and speed, and can shoot blasts of energy from her hands.


The origin story of Captain Marvel is not exactly uncomplicated, given that there are seven different versions of the Marvel character. The original story was adapted for the purpose of the film, and appears in the fourth edition of the Life of Captain Marvel. ‘The true tale of Carol Danvers and her journey to becoming Captain Marvel begins years ago, on a star-filled night in a sleepy town. A night that no one knew would change the world …’


From Pilot to Captain Marvel


Before she becomes the heroine Captain Marvel in the comics, Carol Danvers is a talented pilot in the US Air Force. Her career leads her to the CIA and she finally becomes the director of security for NASA at Cape Canaveral. There she encounters the Kree for the first time whilst on a mission. In an explosion, she comes into contact with the genetic material of Captain Marvel. The DNA belonging to a member of the extraterrestrial Kree fuses with her own and endows her with unimagined superpowers. She then decides to use her newly-acquired power for the good of mankind.


A soldier trained by the Kree (Brie Larson) falls to Earth after an intergalactic battle. One moment she was fighting with an elite Starforce unit in space, and the next she finds herself alone on an alien planet. However, something about the Earth feels familiar to her and the visions and dreams she’s been having make her feel like there’s a connection. She works together with the young S.H.I.E.L.D. agent Nick Fury to try to unravel this mystery and clarify her questions about her origins. In the process she finds out that her name used to be Carol Danvers, and that she was born on Earth. However, she doesn’t have long to get used to her new knowledge, as her newly-found home planet is infiltrated by the enemy Kree, and it’s her duty to defend it.


Whether in the comics or the film universe, Captain Marvel is among the most powerful superheroes. She can fly, has superhuman strength and can fire energy blasts from her hands. What’s more, she has the ability to survive in space and thanks to her Kree DNA she is also immune to most poisons and illnesses.


Captain Marvel can also absorb energy, which makes her a particularly formidable opponent. This allows her to increase her own power and also to create a white hole and use its energy. Due to her time in the Air Force, Carol Danvers is also a sharp shooter and excellent spy. You might have guessed by now that you’re looking at the perfect support for the Avengers. There’s still a while to wait before she enters the fray with the others against Thanos, though, and how better to use it than to kit yourself out with fan merchandise from this extraordinary superhero.


You can find loads of spectacular fan merch in the EMP Captain Marvel Online Shop! How about some cool collector’s figurines of Nick Fury, Vers or the alien cat Goose. Perfect to collect and decorate your space. As well as loads of Captain Marvel T-shirts we also have a heroic dress in the Avenger’s colours and with her logo. You too can become a superheroine with this dress! Want even more superhero merch? Then get ready to discover legendary fan merch from Thor, Captain America or The Guardians of the Galaxy in the EMP Fan Shop.