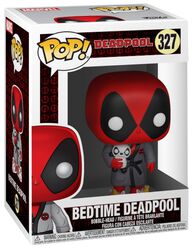 Because let’s face it, if the most famous antihero in film history has one thing, other than his affinity for black humour, it’s his unprecedented talent for chaotic situations. Wherever someone is in need, Deadpool is ready to jump into action, no matter how hopeless the situation may seem, or how strong the opponent is. As the scar-faced Wade Wilson is not currently beating his way through the world of super villains on the big screen, instead he can come straight to your home as a vinyl figure! Just don’t make any stupid comments about his face ... seriously, he can’t stand that!


What did Deadpool call his team, errr, "super-duper group"? We'd rather not say right now, but the fact remains: with a slightly larger budget for a more few X-Men, many a fight against Cable would have gone quite a bit faster. But not to worry, because in the EMP Online Shop you will not only find Deadpool's faithful companions Colossus and Negasonic Teenage Warhead, but also all the other students from Charles Xavier's Institute for Young Mutants. Thanos needs to step on the hate brake? We say put the pedal to the metal! Because the world of Funko POP figures offers you even more potential than Peter! You know, Peter! No, not Parker! The other one! Oh come on, go and re-watch the second part of Deadpool! And with that said: "Daddy has to let off some steam!"