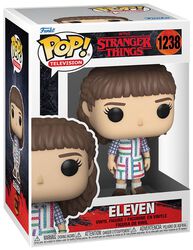 
The Netflix series "Stranger Things" is an absolute blast for fans of science fiction, mystery - and the 1980s. At the same time, it is made absolutely modern, but brings back many memories of films and series of the time. This mix of retro and modern is also a hit with Stranger Things fan merchandise. You also like it funny and stylish? Then take a look at the Stranger Things figurines in the EMP shop!


A huge selection of collectibles awaits you at EMP to make your heart beat faster. Put your favourite hero on the shelf! Is the mysterious "Elfi" Eleven your favourite? Do you prefer Will, or are you more into his friends Mike, Lucas and Dustin? Of course, that's not all. Your collection wouldn't be complete without the right creep factor. Add the nasty Martin Brenner, and don't forget the monster!


In addition, there are other characters from "Stranger Things" as iconic collectible figures in the EMP online shop. On your fan shelf, you can use them to form groups, take sides or form alliances or enmities never seen in the series. Or you can simply enjoy the sight. Some of the Stranger Things figures come in different versions, for example in their Halloween costumes as Ghostbusters. Oh, the irony ...


Why is Stranger Things so good?

Because the 80s were simply iconic. Okay, the clothes and hairstyles were weird. But the films! This series brings back a lot of that charm. Just look at the Stranger Things action figures! The older ones among us will let out delighted cries at their packaging. Because this retro look is familiar to many - this is what collectible figures looked like back in the day!


Only they weren't quite as detailed and realistic as they are today. Which might have been an advantage, because Demogorgon could give you nightmares ... You might prefer the cool and funny Funko Pop! figures. Around ten centimetres tall and featuring giant heads, these vinyl collectibles are among the most popular fan items around.


This is due to their enormous wealth of detail and the loving, slightly ironic way they depict your heroes. All of them always have accessories with them that are characteristic of the respective film character. Where would Max be without her skateboard or Eleven without waffles? Including their packaging, they are all so beautiful that you might not even want to unpack them. Or just once in a while to play with them on the sly ...


You'd rather have something tangible to show off the nerd in you to the outside world? EMP also has Stranger Things figurines as keychains. And a few other variations of figurines that you should definitely check out in the shop.