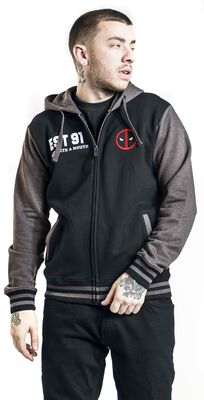 The hired hitman never misses, and with these Deadpool jackets, you’ll hit the target when it comes to looking your best…


When Deadpool was first introduced to the Marvel comics in 1991, he was depicted as a supervillain. The mercenary was introduced in The New Mutants and would also appear in X-Force but he would soon drastically switch into a more likeable antihero – still with questionable morals, of course. Real name Wade Winston Wilson, Deadpool was portrayed as a disfigured mercenary with the superhuman ability of regeneration and physical prowess. Eventually, the tone around Deadpool changed. He became less of a straight-forward villain and became something in between hero and villain.


With his powers, he literally cannot die and has been ‘killed off’ in many iconic Marvel storylines throughout the years but never goes away for long. Which has turned out well for fans as he has quickly become one of the cult favourites. Deadpool went from fan-favourite to pop culture icon after getting the Hollywood treatment. Ryan Reynolds would play the character and introduce him to a whole new audience. First portraying the character in X-Men spin-off, X-Men Origins: Wolverine, Reynolds would prove popular, landing Deadpool a solo movie in 2016. This was followed up with a sequel in 2018 and he is set to join the rest of the MCU following the Disney merger.


Available in a range of different styles, our Deadpool jackets and zip-up tops take inspiration from both the comics and the movies. Designs include classic images of Deadpool from the comics and visuals that play on the dark, twisted sense of humour that the franchise is known for.


As well as being fun and indicative of your favourite superhero franchise, the Deadpool jackets are great for hopping into action. Throw them over a t-shirt, pair them with some jeans and you’ve got yourself an outfit. Little effort, big impact.


Once you’ve hit the target with your newest Deadpool jackets, check out the rest of our official Deadpool merch!