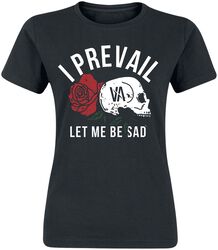 Michigan has produced music legends that prevail: Madonna, Eminem, Iggy Pop, Kid Rock, Ted Nugent, Alice Cooper. There must be something in the water because Michigan went metalcore with the debut of I Prevail.

The band rose to popularity after releasing a metal cover of Taylor Swift's "Blank Space" as a single which went Platinum in sales. After this, I Prevail started to, well, prevail. After exploding onto the scene in 2014, the band found themselves nearing half-a-billion streams across digital platforms and over 115 million YouTube views. One of their signature tracks "Alone" become a Top 5 Active Rock radio smash, the band won Best New Artist at the Radio Contraband Awards and they reached audiences across the world, playing over 500 shows in just three years.

However, I Prevail became much more than a name, it became a battle cry deeply personal to the trials faced by members of the band as personal traumas darkened professional triumphs.

As the band started to finally achieve what every aspiring musician wants – success, appreciation of their art and earnest fans – lead singer Brian Burkheiser simultaneously faced what all musician or artist fears – the loss of their talent. He persevered through a debilitating vocal injury with the potential to end his career. Ashamed and fighting to steadfastly power through, he retreated from the public eye and those around him. As people tried to reach him, he pulled further away.

In true cliché speak, the darkest night came before a new dawn though. It was this battle that re-energised I Prevail to come back bigger, better and with more heart. Their second album, "Trauma", used the heartache and hope to take their artistry to new depths.

As the Michigan metalheads continue to redefine their sound, you can get on board for the journey. Our I Prevail merch – all fully licenced and official – is a way to connect to the community and find your tribe. The selection of I Prevail merchandise on offer includes t shirts and other clothing. Some of the designs to choose from include an exclusive Thrasher I Prevail t shirt – only available from EMP!