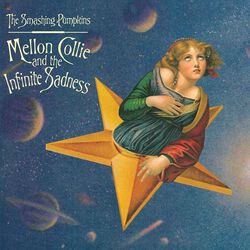 Bands go through ups and downs, but maybe none more so than the Smashing Pumpkins. Five years after the third album sold more than 30 million copies worldwide, the band would split - and not for the first time. Artists such as Nelly Furtado and Gerard Way have cited the Smashing Pumpkins as influential on their sound and at EMP we still have a home for this iconic band. Here you will find official Smashing Pumpkins merchandise, including t-shirts as well as CDs and Vinyl.

Formed in 1988 by frontman Billy Corgan, The Smashing Pumpkins are an American alternative rock band from Chicago. Their second album, “Siamese Dream” is the album that broke the band into mainstream music and they became one of the most successful and critically acclaimed bands of the 90’s. The follow-up double album “Mellon Collie and the Infinite Sadness”, debuted at number one on the Billboard 200 album chart. However the fourth album “Adore”, made after the departure of drummer Jimmy Chamberlain, has been characterised by Billy Corgan himself as "an album made by a band falling apart"

Rise and fall and rise again

Singer and guitarist Billy Corgan met James Iha while working at a record store in Chicago. Corgans gothic rock band ‘The Marked’ had just broken up and with the help of a drum machine, the two started writing songs. After securing their first live gig, and prompted by a conversation with Cabaret Metro owner Joe Shanahan they recruited jazz drummer Jimmy Chamberlin. It was an addition that not only helped the Smashing Pumpkins to secure more live bookings, but it also helped them secure a much harder sound.

Heavily influenced by the Cure and New order, and although Chamberlin steered the sound more towards rock, the direction of the band has always been dominated by Billy Corgan. At times maybe too much so, with Corgan often playing all the instruments, except the drums, in order to get the consistent sound that he wanted in the studio. This level of control and dominance often created tensions within the band.

Soon after signing with Virgin Records the band started their meteoric rise, opening for bands such as the Red Hot Chili Peppers and Guns 'N Roses. But during the first album tour, original Pumpkins bassist D'arcy Wretzky and James Iha went through a messy break-up. Drummer Jimmy Chamberlin became addicted to drugs and alcohol, and Corgan fell into a deep depression.

In late 1992 the band moved to Georgia to work on what would become their break-through second album. A decision fuelled by both a desire to cut Jimmy Chamberlin off from his drug connections, but also an intense pressure for The Smashing Pumpkins to assimilate the success of other grunge bands of the era such as Nivana and Pearl Jam. Chamberlin found new drug connections, but despite delays and problems recording the album, “Siamese Dream” debuted at number ten on the Billboard 200 chart, and sold over four million copies in the U.S. alone. The third album Mellon Collie was released in 1995 and was even more successful than the second, debuting at number one on the Billboard 200 and certified 10 times platinum.

Disagreement, drugs and dying dreams meant that The Smashing Pumpkins faded away in terms of commercial success, but they still have an army of loyal fans. The band have continued to grow and challenge themselves, but instead of chasing his dreams Chamberlin seemed hell-bent on chasing his demons. He was eventually fired from the band following his part in the tragic death of touring keyboardist Johnathen Melvoine, who died from a heroin overdose in a hotel room.

Billy Corgan and Jimmy Chamberlin reunited in 2001 for a new project, but after several cancelled festival appearances the band broke up. In 2005 Corgan announced that the Smashing Pumpkins were going to reunite, with Chamberlin as a confirmed member of the line-up. In 2007 The Smashing Pumpkins performed live for the first time in 7 years, and released a new album “Zeitgeist”, which was much anticipated by fans and entered the billboard chart at number 2. But Chamberlin once again left the group in 2009.

Both Corgan and Chamberlin went on to create separate projects with Chamberlin later joining Corgan's new band ‘Spirits In The Sky’ and the pair later announced that they were making new Pumpkins recordings again. Four more albums have been released since Zeitgeist and in February 2018, the band officially announced that founding members James Iha and Jimmy Chamberlin were once again back in the band. Perhaps no other band have emulated the rollercoaster of life as much as the Smashing Pumpkins, but they still stand strong today.

Make every day the greatest day that you have ever known, with new and exclusive Smashing Pumpkins merchandise from EMP.